This is a repost of a guest post for AskPalpatine.com; my response to the Design a Better Vader competition. The full results and opinions of the other judges can be found here.

There you are, a scarred and battered Anakin yours to mould. You can do anything with him – anything! – change his face, his body, his gender, her image, its impact. You can remake the Ultimate Villain into whatever you want… an armoured giant, a perfect beauty, a sex toy…

Being asked to judge a competition like this means you have to make a tough choice. You know that the ten semi-finalists will all be arse-kickingly good – and you know you have to pick the best ones. It’s a hard selection – but as the Emperor threatened my son with incarceration in the Spice Mines of Kessel, I had no option: –

Forbidden Planet is about being different. For my three, I chose to look for those who’d thought outside the armour – who’d actually broken or changed the classic Vader mould and done something new with the Anakin canvas. 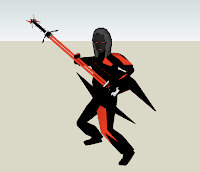 My second runner up is No 6 because it’s androgynous – even inhuman. I like the strong use of simple colour and the stance… and (oh yes all right) I like the weapon. Forbidden Planet aside for a moment, the Viking in me is still a bit of an ordnance freak and giving the New Vader a New Weapon seemed an integral part of the creation. It’s strong, and striking and simple – and carries the right sense of presence and fear.

My first runner up is No 9. It references Vader in the caricature helm and armour, but I love the play on Master Yareal Poof (the position of the lightsaber didn’t go unnoticed – no, I’ve never worked out how he managed to fight either!) and the comical contrast of a belly that would better on Selbulba. It’s sharp, well-drawn and insightful – and the wristwatch on the chest gives it a comedy-steampunk look that ties it all in perfectly. 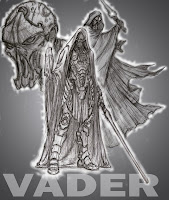 My winner is No 10 – am image that has taken the traditional Vader and made him darker, more evil, less human. I love the picture – it’s gothic, dramatic, sinister – and it’s the one that’s made me think. Not about his WarHammer –esque appearance – but about how changes in his construction would change his character, would change the story in Episodes IV though VI, and change the whole Universe of Star Wars as we know it.

Could you imagine this Vader being mushy about his Jedi son?

If you’re going to design a New Vader – why just stop with how he looks?

Reposted with thanks to Emperor Palpatine, and to Diz and the boys from the 501st for their help in choosing a new Boss, right in the middle of Forbidden Planet’s birthday party: –